Is there anything that you are attached to?

Who can spend a day without being attached to their mobile phone? Laptop?

How often do you check up on your Whatsup/Wechat?

Is technology truly a solution to our problems? Or are we excusing ourselves from digging deep into the real problem and offering an authentic problem?

It took me a while to figure out that I am aligned with Futurists and how Futurists think.  The curiosity, exploration and openness in discussing the future is about finding not just me but my tribe.  So who are Futurists?

One definition that summarises it rather well is from ASHA:

‘Analyze data to identify trends and build their forecasts. They study phenomena by making observations based on collected data. The purpose of their studies is to uncover relationships between current events and variables that will affect the future. The problem with many forecasts is that the large number of variables makes it difficult to make an accurate projection. Different futurists place different levels of value on certain variables, so it is not uncommon for the predictions of even the most respected futurists to be highly divergent.’

Dr. Ray Kurzweil has presented many thoughts and ideas particularly in relation to health (The Singularity is Here), living forever and 3D printing which provides food for thought.  His thoughts and emphasis on health and desire to live forever is no longer limited to films like Gattaca and the Matrix.  Where humans and machine intersect we are asking ourselves when looking into the future what would we like to see.

It requires imagination, and I would say even more intuition.

When people ask, ‘will robots take our jobs’ or ‘will automation destroy more jobs than it creates?’  There are optimists out there that would say, that in the future there would be more jobs created than destroyed, and it may require retraining but it’s ok, we’ve been here before.  Think of the steam ship, we were there and now we are talking about autonomous shipping.  I spoke on traffic systems to an audience of senior leadership at the shipping industry, and the feeling I got was ‘we are not ready yet.’

As a Futurist, I have been thinking of this for the last few years and am finalising seeing my thoughts come into reality.  Hollywood films are no longer stuff of dreams but a reflection of how we can envisage our future cities and traffic systems.

How do we add any flesh to the bone when speaking with say realists?  They like facts, they like evidence supporting the claims.  However, not all thoughts particularly future thoughts can be supported by evidence.  It is counter-intuitive.  At times it may not even make sense.

How would wearing an item like a ‘Fitbit’ feel like 20 years ago?  I could just imagine a response like, ‘Oh, don’t be silly – that would never happen.’  I wrote an article a few years ago on the Future of the Legal profession and I have had colleagues say to me time and time again ‘AI will never be able to replace us.’  That was about 3 years ago and now we are seeing all kinds of legal startups and technologies popping up impacting on law firms and the legal profession.  Now take your breath – ‘Fitbit’ as expert evidence or expert?

Perhaps not known to many in the legal profession, Dr. Kurzweil developed technologies that were first bought by LexisNexis and guess what?  All that technology was used as a great tool that compiles all the case law that lawyers and researchers use to back up their cases, arguments and to find laws and regulations.

So are we coming full circle?

It’s time to get our heads out of the sand.  The last to rise is probably the first to fall.

Welcome to my world. 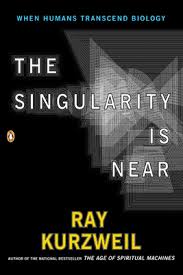